The Return of Thunderstorms; a Humid and Stormy Summer in 2015 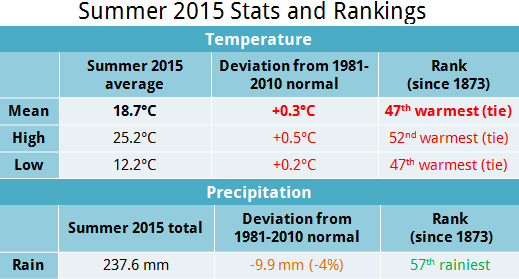 With an average mean temperature of 18.7°C, summer 2015 was just 0.3°C above normal. Each month was within one degree of normal. It was a typical summer in terms of temperatures as a result.

There were 8 days over 30°C from June to August at Winnipeg Int'l airport, slightly below the normal of 12 days. In fact, the airport station did not reach its first 30°C of the year until July 26, the second latest on record since 1872. We came close to 30°C several times before, reaching 29°C 9 times before July 26. It seemed like the airport had a bit of a cold bias. The Charleswood station reached 30°C on 16 days this summer and had reached its first 30°C on May 26. The Forks reached its first 30°C on July 10 and reached 30°C on 13 days.

In the last 20 years, 9 years saw a top 10 most humid summer since 1953. Summers have become increasingly humid since the 1990's and this is easily seen in the graph below. The graph shows the top 20 most and least humid summers (red and blue dots) and the 30-year running mean (green line). Whether or not the increasing humidity is a trend that will continue is unknown. With only 63 years of dewpoint records, there simply isn't enough data to see if there were similar humid periods in the past.

Manitoba easily had the most reported tornadoes in Canada in 2015. Ontario was second place at ''just'' 6 confirmed tornadoes (as of Sep 29). Alberta had about 5 and no tornadoes were reported in Saskatchewan. Thankfully, no injuries or fatalities occurred in Manitoba from tornadoes this summer.

In Manitoba, 3 tornadoes and waterspouts were reported in June, at least 6 in July and 2 in August. The July 18 and July 27 tornadoes/waterspouts were the most documented, attracting attention from around the world. On July 18, a landspout tornado near Matlock travelled over Lake Winnipeg, becoming a waterspout. The storm then produced at least one other waterspout. The two waterspouts occurred simultaneously, as seen in the following photo by Wray Pearce.

On July 27, a supercell thunderstorm travelled from Tilston to Virden, producing multiple tornadoes. Some were quite violent as seen on storm chasers' videos. One tornado reached close to a kilometre wide. Luckily, the strong tornadoes dodged all major communities and narrowly missed Virden. Only a few farms experienced some damage. Environment Canada sent a damage survey team to investigate. The worst damage they saw was from a high-end EF-2 tornado (winds close to 200 km/h). It is entirely possible that the tornadoes may have been even stronger, but when/if they were they weren't hitting anything significant. Photos and video of the tornadoes can be seen by following this link.

After 4 years of marginal thunderstorm seasons in parts of southern Manitoba, 2015 saw a spike in severe thunderstorm activity. Other than tornadoes, hail and flooding rains were also big stories of 2015. Of the three Prairie provinces, Manitoba saw the most severe hail and thunderstorm rain reports. The majority of severe hail reports were in August partly thanks to significant nocturnal thunderstorm events late month. In fact, half of all severe hail reports this summer were in August. As for severe thunderstorm rain events, almost three quarters of them occurred in July. The increase in activity this year was despite a very slow start to the season. No severe thunderstorm reports were received in May. In fact, Winnipeg Int'l A didn't get its first t-storm until June 7, the 3rd latest start to the season since 1953. Below is a summary of the major t-storm events of the summer across Manitoba.


June 27 - A supercell thunderstorm developed west of Carman in the mid afternoon and quickly dived south into North Dakota. Significant hail and wind damage occurred with the storm from Roseisle to Miami to south of Winkler. Roseisle was hardest hit with wind-driven baseball-size hail (wind gusts estimated at 100 km/h). Some trees were knocked down, leaves were shredded and crops were damaged. Hail also smashed windows, dented vehicles and punched holes into home siding. Miami lived a similar fate with golf ball-size hail, 100 km/h winds and over an inch of rain. Wind was the concern near Blumenfeld and Haskett (south of Winkler) with yard sheds and swings knocked over and trees/branches knocked down. While all this was happening, another strong thunderstorm was developing north of Arborg. As it moved south, it dropped tennis ball-size hail in Fraserwood and loonie-size hail in northeast Winnipeg.


July 4 - A widespread area of thunderstorms formed along a trough of low pressure from southwestern Manitoba to the Interlake throughout the afternoon. Training storms in the Woodlands, Fraserwood and Gimli areas dumped over 50 mm of rain in just 1 hour. The storms in Fraserwood lasted close to 4 hours, dumping up to 95 mm according to an unofficial spotter. Overland and street flooding were widespread in the area. Large hail was reported in Arborg, Macdonald, Minnedosa and Elkhorn. Elkhorn was hardest hit with golf ball-size hail, causing vehicle and plant damage. Storms then organised into a bow echo which raced through Winnipeg and the RRV in the early evening. Wind gusts of 90-100 km/h were reported in southwest Winnipeg and southeast of the city. Uprooted trees, fallen branches and other damages occurred. More storms developed behind the line in the late evening, dropping up to golf ball-size hail around Steinbach.


July 15 - Numerous severe thunderstorms developed through southwestern and south-central Manitoba in the afternoon. Large hail was not a big story but toonie-size hail did fall east of Dauphin. Heavy rain in slow-moving storms and damaging winds were the main story. The west side of Brandon was hard hit late afternoon with 50-60 mm of rain in just 1 hour, causing severe street flooding. Training storms also reportedly dumped about 100 mm in a few hours east of Deleau. Separate storms produced wind gusts of 100 km/h near Morris and dumped 50-75 mm of rain around St. Pierre Jolys and St. Malo in just 2 hours.


August 12 - Severe nocturnal thunderstorms impacted the Onanole area near Riding Mountain Nat'l Park around 7 am. Hail up to golf ball-size damaged vehicles and damaging winds knocked over dozens of trees. The wind also tore part of a home's roof and blew it 300 metres away. Residents in the area thought they had witnessed a tornado, but given the situation it is more likely that it was a microburst. Storms then moved into the Neepawa and Gladstone areas between 8 and 11 am, dropping quarter to golf ball-size hail which damaged crops and vehicles. Widespread thunderstorms continued their trek southeastward throughout the afternoon, dropping loonie-size hail near Plum Coulee and loonie to golf-ball size hail around Vita and Caliento.


August 22 - Heavy thunderstorms brought flooding rains on August 22 to Winnipeg. Up to 50 mm fell in less than 1 hour in parts of the south end. Quarter-size hail, wind gusts to 80 km/h and frequent lightning also occurred, making for quite a storm to remember. Numerous streets and underpasses flooded and some were impassable. Water seeped into and flooded parts of St Vital Mall. Lightning also caused a few fires. The daily total rainfall at the Winnipeg airport was 38.4 mm, breaking the old record of 38.1 mm in 1959 for the day. Over 50 mm fell in the south end, making it one of the wettest days since 2010.

In addition, severe nocturnal thunderstorms also occurred during the overnight hours early on August 22. Winnipeg was spared the worst with only minor rainfall amounts and frequent lightning. Cottage country north of the city was not as lucky. A swath of quarter to softball size hail fell from Teulon to Matlock to Beaconia to Pine Falls. Major damage occurred, especially in the Grand Marais to Beaconia region where one person reported that every single vehicle outdoors during the storm was severely damaged. 50+ mm of rain also fell in the area within 1 hour, making for quite a storm. The largest hail reported was a 4-inch diameter hail stone near Powerview.