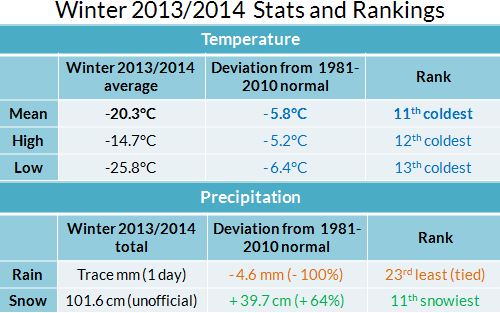 A worst winter nightmare come true? Not only was this winter the 11th coldest but it was also the 11th snowiest (since 1872). Due to this combination, along with frequently strong winds, it really was about as harsh as winters get around here.

Of course, it was the persistence of the cold rather than its intensity that was the story this winter. All three winter months averaged -20.0°C or colder, only the second time that this has occurred since 1872 (last time was the winter 1886-87).

Perhaps the following is the most amazing statistic. 75 days this winter dipped below -20°C, the 4th most -20°C days in a winter since 1872. That's 83% of all the winter days! The following table shows the top 5:


And the following table briefly summarizes temperatures this winter:

Now, let's list the extremes seen this winter...
And finally, the one storm system to emphasize this winter was on January 15. Not only were record highs broken (high of 3.3°C in Winnipeg), but thundersnow reportedly occurred west of Winnipeg associated with a strong cold front in the evening (according to Brad from A Weather Moment). However, the high of 3.3°C in Winnipeg was an incredible 30.7°C rise from a low of -27.4°C the same morning. This makes it the greatest single-day warmup on record since 1872 (''single-day'' being equivalent to ''calendar day''). The following table shows the top 5 greatest single-day warmups:

Note that this statistic does not consider how quickly the warmup occurred. On January 15, the 30.7°C warmup occurred in about 14 hours, which is one of the fastest warmups on record. However, in the past even more rapid warmups have occurred. An example was on April 28, 1985 when the temperature rose 26°C in just 8 hours (from 4°C to 30°C).

Thanks for reading and here's hoping for some warmer weather! (Although we have to admit, a slow warmup is preferable this spring due to the amount of snow cover).