A Month of All Seasons 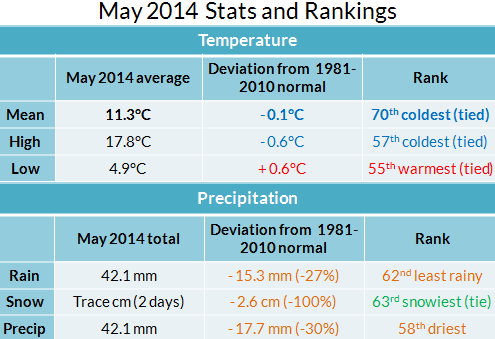 May was a month of extremes as we abruptly transitioned from April-like conditions to July-like conditions during the 3rd week of the month.
Despite the extreme warmth at the end of May, the month averaged pretty much bang on the 1981-2010 normal at just 0.1°C below normal. This is just enough to keep the below normal month streak alive with May being the 8th consecutive month averaging below the normal. This so far ties for 7th longest below normal streak since 1872.


However, May thankfully put an end to a 5-month streak of months averaging over 3.5°C below normal, the longest streak of its kind since 1872. May was also the 17th month averaging colder than normal in the last 20 months (since October 2012).

The cold began to lessen a bit mid month however. We experienced our first 20°C of the year on May 10 with a high of 23.2°C. This was the 18th latest first 20°C of the year since 1872. Normal is April 20 and therefore, we were a good 3 weeks behind schedule. However, it was cold enough for snow in the early morning on May 14. Some light accumulation was reported in some parts of the city. This was the latest snowfall since 2009 when we had some snowflakes on May 15. Temperatures dipped to -5.8°C the following morning, the 9th coldest low on May 15 on record.

Mother Nature then had a mood swing by the 3rd week of May as conditions suddenly became summer-like. Afternoon temperatures regularly exceeded the 20°C mark by May 22 and some days were particularly hot with 7 days exceeding 25°C. In addition, 2 days exceeded 32°C, the most 32°C+ days in May since 1995 when we also had 2. It was hot enough for a record high on May 24 as temperatures soared to 33.3°C, the hottest day in May since 1995 when we hit 33.7°C on May 30. Thunderstorms also made an occurrence with storms in Winnipeg on May 20 and 24. With May 20 seeing our first thunderstorm of the year, it was the 8th latest start to the thunderstorm season since 1953.

Other intense thunderstorm events occurred on May 25, 26 and 29. Trailing thunderstorms brought significant street flooding to Steinbach on May 25 as 25+ mm of rain fell in a short period of time. Severe thunderstorms on May 26 in the Melita area brought damaging winds, hail and 28.6 mm of rain. On May 29, widespread thunderstorms, some severe with large hail, impacted southwestern Manitoba. Again, trailing storms brought impressive rainfall totals with 51 mm in Swan Valley, 39.7 mm in Melita and 35.6 mm at Brandon airport. An impressive lightning display occurred in the evening as well.